Our company delivered a packed WWTP Cleanny 40 EO for a guest house „Kozí chlívek – Deštné v Orlických horách in 2011. The delivery was carried out according to design documents, which had been prepared a long time before by a project architect, who we did not know. The project documentation described a WWTP with general specifications without business identification. There was a two-year gap between project documentation completing and guest house project implementation. At that time, construction changes were made. The extent of changes increased production of sewage water. 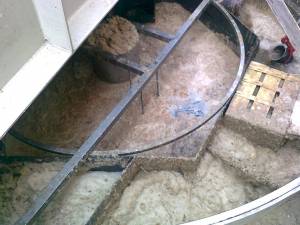 The WWTP was put in operation in September 2011, since weekend culinary events (e.g. Saint Martin´s goose, etc.) took place in the guest house in September and December 2011. Unfortunately, problems with the WWTP occurred:

1. A wellness studio was opened, whose drain pipes were connected to the WWTP inlet without supplier´s knowledge. Therefore, hydraulic overload occurred every time when drinking water was refilled.

2. the separator installed by another supplier did not secured adequate grease separation, it had insufficient capacity and it was too near to the structure, i.e. the sewage water was not cooled down enough, before it entered the device.

Unfortunately, climatic conditions did not enable us to take any measures which could help to solve the situation. As the season went by, we were keeping the WWTP going together with the guest house keeper only with difficulty at the cost of increased operating costs. It meant to take the sludge out every week, constant operation of blowers, extra cooling of the separator and maintenance of the WWTP done every other day by our specialists. Until the end of the winter season, the WWTP was run regardless of the costs. Therefore, we were able to meet qualitative limits of the Water Law Authority.

After long negotiations, we reached a consensus with the investor and we agreed on the extent of corrective measures. At that time, negotiations with German company Levapor GmbH were in progress regarding Levapor biocarriers application. We wanted to gain our own experience with efficiency of their biocarriers, therefore, we decided to apply them to our troublesome WWTP. Polyurethane loose biocarriers with percentage of activated carbon (carrier 20 x 20 x 7 mm in dimension) were used. Technological changes were made in activation aerated part of the WWTP, which kept the biocarriers in this part of the WWTP only. We focused on improvement of the WWTP operation before the winter season started i.e. we fixed operational sludge concentration to 4,5 kg of dry substance /m3and checked the integration of carriers by microbiological analysis. The analysis confirmed the fact that there is a sufficient amount of microflora on the carriers. Moreover, the analysis proved that the microflora contains bacteria, which satisfy the needs of water treatment process. After that we monitored the operation of the WWTP with regards to the guest house operation.
While monitoring the operation of the WWTP we recorded all factors, which could have influenced the operation of the WWTP, technical data and we carried out laboratory tests on water quality.

At the beginning of the season we managed the WWTP operation without bigger problems, the WWTP showed required figures on water quality at the outflow. We were afraid of New Year´s Eve week. However, the results were highly satisfactory and the WWTP operation results did not changed even in another month - January 2013. Up to this day, we can say the following:

1. Biocarriers confirmed the possibility of double material load of the WWTP, the guest house did not have problems with hydraulic load before the application, but only with material load

3. The water quality limits at the outflow (required by Water Law Authority) were met highly satisfactorily.

4. The sludge age increased from last year´s 12 days to 58 days, which confirms an amount of superfluous sludge and a significant reduction of costs on sludge elimination.

7. Our fears of possible biocarriers efficiency inhibition due to increased volume of greases and fibrous dirt (hair) did not come true. Our carriers did not become balls of grease full of hair after four-month operation. Despite the fact, we developed a new patented device for fibrous dirt reduction – hair traps. These traps will be installed in the course of every Levapor application.

The biocarriers confirmed the function stated by the German manufacturer. On the basis of these results, prof. Jeníček (VŠCHT Praha) established a partnership on application of carriers in the Czech and Slovak Republics. The cooperation concentrates on pilot evaluation of efficiency of the individual applications. Supposably, we can utilize another attribute of Levapor – the increase of nitrification efficiency due to growth of new biomass in aerobic treatment.

Back to Other products